Technocampus Ocean, in Bougenais (France), is a new research centre specialised in metallic processes and offshore structures, which gathers 350 researchers and technicians. This unique building features a façade showing images of a clear blue sea, realised thanks to Muralys® Creativ, an innovative solution of Arval by ArcelorMittal, allowing to print any visual on a metallic façade.

Technocampus Ocean is a distinctive building, with its modern design and its blue façade reminiscent of the ocean. This 18,000 m² facility, located near Nantes, is since October 2015, the new research platform for naval and Marine Renewable Energies activities. The architectural firm Rocheteau-Saillard chose our solution Muralys® Creativ to realise the façades of the Technocampus Ocean. Muralys® Creativ is a digital transfer solution allowing architects to print on a metallic façade any type of image (photograph, drawing, logo, etc.).

With 2,500 m² of printed façade, Technocampus Ocean is the second biggest project realised with Muralys® Creativ after the Montpellier Arena.

Arval by ArcelorMittal demonstrated its ability to develop technical and aesthetic customised solutions in order to meet the architect’s very detailed specifications. As Technocampus Ocean is dedicated to naval and marine activities, the architectural project suggested to emphasise its activity on the façades; thus, the choice of a picture showing a deep blue sea taken by Philippe Plisson (photographer specialised in maritime photography).

The Arval solution perfectly matched the architect’s requirements as they needed a graffiti-proof product with excellent durability and a 10-year guarantee. The photograph was depixelated and fully digitalised. Neutral images were created to connect the beginning and the end of the visual and to give the impression that the image is infinite. It was then printed in high definition on 1,162 steel lacquered panels.

For this very specific implementation, each piece was numbered and then assembled according to a slab layout plan made by Arval by ArcelorMittal in collaboration with the building contractor Axima to comply with the architectural complexity and the technical constraints involved in the manufacturing and the mounting.

Eric Saillard, the architect in charge of the project explains: “We chose sleek steel panels to make sure to have a smooth surface for the visual. Arval by ArcelorMittal’s SP steel panels perfectly responded to the need of a sleek and precise slab layout.”

A customised building, thanks to Muralys® Creativ 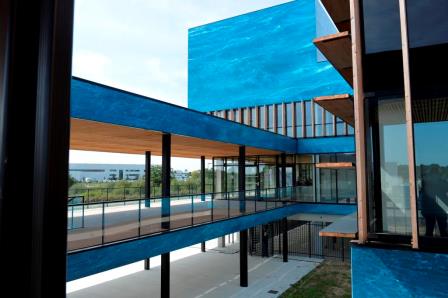 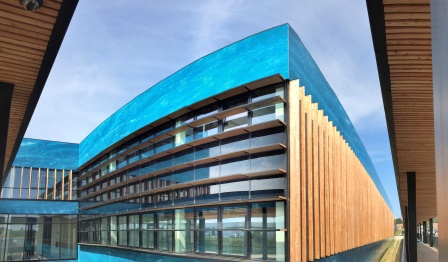