Call for projects from 9 October 2018 until 9 January 2019: ArcelorMittal launches the Innovator Awards focusing on the Connected Factory

ArcelorMittal launches the Innovator Awards focusing on the Connected Factory


9 October 2018 – ArcelorMittal, the world's leading steel making company and a major player in French industry, is getting behind innovation by supporting the men and women who are creating the industries of the future.

The steel industry is increasingly digital, connected and "smart": that's why, for the second edition of the Innovator Awards, ArcelorMittal has decided to showcase people spearheading projects designed to bring about the Connected Factory. From drones to virtual reality, robots to artificial intelligence – there are no limits when it comes to digital innovation for industry!

Innovative men and women are invited to submit their applications via the
www.prixdesinnovateurs.com website between 9 October 2018 and 9 January 2019 and try their hand at winning one of the three grants that are up for grabs: €30,000, €15,000 and €10,000. A panel made up of eight people will convene in March 2019 and vote for the best projects. The winners will be announced at the awards ceremony in April 2019.

"By launching this second edition of the Innovator Awards, we are confirming our commitment to innovation in France. Digital technologies are rapidly sweeping across our industry. This is a development that we want to support by helping the men and women engaged in innovation to launch and get their projects up and running", says Eric Niedziela, Country Head of ArcelorMittal in France and President of the Innovator Awards panel.

Who? Everyone with projects based in France

The competition is open to students, young graduates, entrepreneurs… more widely, anyone spearheading an innovative project to do with the Connected Factory – alone or as part of a team in France.

What? The Connected Factory

If a project is innovative, digital and likely to change the way people work in industry, then it can be entered into the Innovator Awards. So it can be to do with production or maintenance, as well as e-commerce, collaborative working methods, the supply chain, research and development, human resources or customer relations (CRM). All areas are covered!

The three most relevant and promising projects will be rewarded: the first two will be selected by a panel made up of eight people from the world of tech and industry (see presentation of the panel below), and the third will be voted for by ArcelorMittal's employees in France.

Innovators have until 9 January 2019 to submit their projects via the Innovator Awards website.

The projects will then be looked at by the panel. Once they have drawn up a short-list, the panel will convene in March 2019 when the selected candidates will get to pitch their projects and the best ones will be chosen.

Several selection criteria have been chosen: the inventiveness of the project, its maturity, its feasibility, any ways in which it may be extended and the quality of the presentation to the panel members.

The names of winners will be announced at the awards ceremony in April 2019. 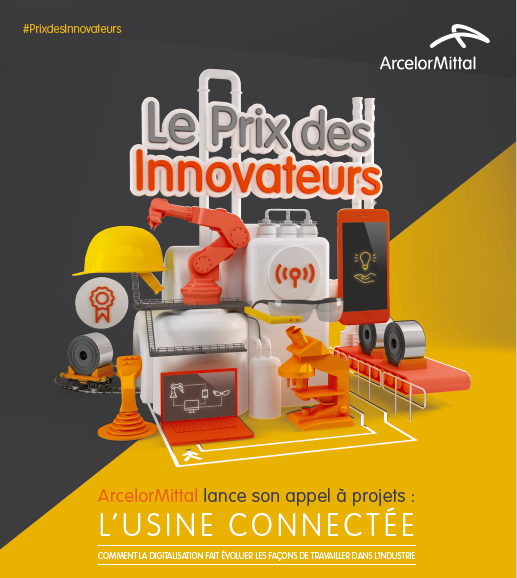