22 June 2018 - ArcelorMittal is installing a new high-technology welding line at its ArcelorMittal Tailored Blanks Lorraine facility in Uckange, France. The new line follows a EUR7 million investment and will be the world’s first installation and application of a technology which enables two key processes in the production of laser welded blanks (LWB) – welding and partial ablation – to occur simultaneously. This will result in a 50% capacity increase when production begins - expected in September 2019.

Laser welded blanks are an innovative way for automakers to enhance crash and safety performance while improving the fuel economy of the vehicle. By welding together steel grades with different coatings and thicknesses, LWBs ensure strength can be concentrated where it is most needed for crash resistance while more ductile steels can be used in the same part to control deformation. With LWBs, overall material thickness is reduced, decreasing weight and emissions. Manufacturing, material, and transport costs are reduced significantly.

The decision to locate the new welding line in Uckange is based on the proximity to the supply of press hardenable steel, which is required in the production of tailored blanks, from ArcelorMittal’s plants in Florange and Mouzon. Uckange is also well located for supply and distribution to ArcelorMittal Tailored Blanks’ key automotive customers.

The EUR7 million investment in the new welding line was made with the support of Tailored Blanks Lorraine’s local community and government stakeholders. The Grand Est region will provide 10% of the investment and 25% of the related R&D expenses, and the Val de Fensch community will also provide co-investment in the new installation. ArcelorMittal will employ local companies for specific parts aspects of the project.

A laser welded blank (LWB – also known as a tailored blank) is a sheet of steel which combines several different grades. Each grade can have different thicknesses and/or coatings. LWBs allow a part to be engineered for optimal performance and lightweighting.

The separate grades are laser welded together to create a single sheet of steel which has the best grade in the best place for strength and deformation. Each sheet can be hot- or cold-stamped to give the part its final shape.

The result is a ‘tailor-made’ solution with significant advantages for the customer. Today, LWBs are commonly used in automotive construction, particularly for the body-in-white and closures of a car.

Application of LWBs in the automotive industry

Laser welded blanks (LWBs) are an innovative way for automakers to reduce the weight of their vehicles while improving safety at the same time. They allow OEMs to combine different steel grades into one single part to ensure the right steel is in the right place for safety and performance. By welding together steel grades which deliver the required performance in exactly the right place, we can save steel and deliver weight savings.

As well as different grades, the LWB can include steels with different coatings and thicknesses to optimize the part. In this way, strength can be concentrated where it is most needed for crash resistance while more ductile steels can be used in the same part to control deformation. With LWBs, overall material thickness is reduced, decreasing weight and emissions. Manufacturing, material, and transport costs are reduced significantly.

This approach has another important benefit; in that it allows us to dramatically cut the amount of scrap material produced. That’s because making a similar shape out of a single piece of steel would mean half of it would be scrap. By welding together smaller pieces, and nesting those pieces cleverly, we drastically reduce the amount of scrap.

Steels for hot stamping such as Usibor® and Ductibor® are delivered with an aluminium-silicon coating. The coating prevents scale formation and surface decarburization during the hot stamping process. It also helps to protect the final part against corrosion.

In the process ArcelorMittal has developed, the aluminium-silicon coating near the edge is partially ablated by laser. The process removes the top layer, avoiding excessive aluminium in the weld. The intermetallic layer is intentionally kept to guarantee corrosion protection. If the aluminium is not removed it can migrate into the weld, weakening the connection. 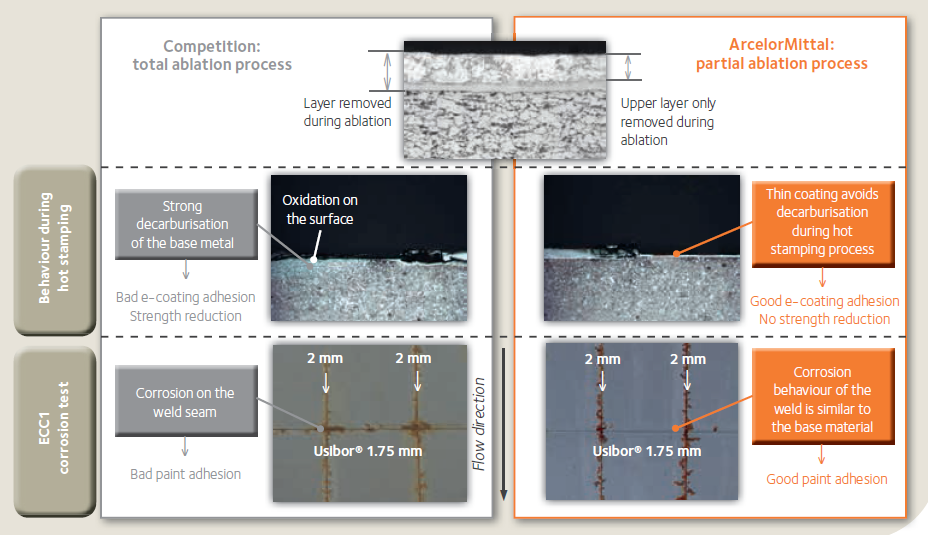 At the same time, manufacturing, material, and transport costs are reduced to enhance the competitive position of OEMs.

ArcelorMittal Europe employs more than 80,000 people and produces approximately half of its total steel volume in Europe. With a presence in 17 European countries and around 400 different sites, ArcelorMittal Europe had revenues of €29 billion and a crude steel production of 44 million tonnes in 2016. We supply flat and long steel products for all major steel markets, including the automotive, construction, packaging and household appliances industry – supported by a leading R&D and distribution network with 9 laboratories and 1,000 full-time researchers in Europe.

ArcelorMittal is the world's leading steel and mining company, with a presence in 60 countries and an industrial footprint in 18 countries. Guided by a philosophy to produce safe, sustainable steel, we are the leading supplier of quality steel in the major global steel markets including automotive, construction, household appliances and packaging, with world-class research and development and outstanding distribution networks.

We are one of the world’s five largest producers of iron ore and metallurgical coal. With a geographically diversified portfolio of iron ore and coal assets, we are strategically positioned to serve our network of steel plants and the external global market. While our steel operations are important customers, our supply to the external market is increasing as we grow. 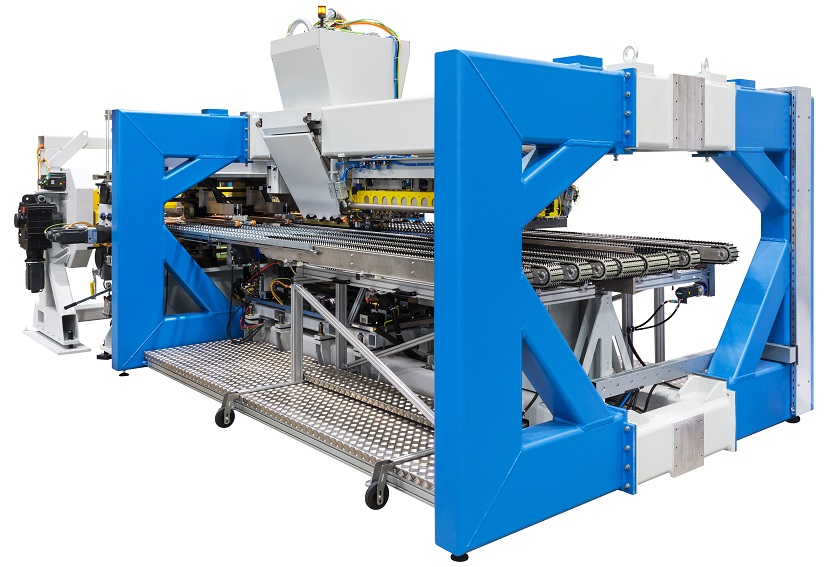